Well Crafted NC promotes North Carolina craft breweries and their history to a broad community, helping locals recognize and appreciate that the current breweries are part of a long history of brewing, while also providing local breweries with a single online resource that traces their histories and places them within the context of the broader development of the brewing industry across the state.

This project is a celebration of brewing history in North Carolina, bringing people into the area to celebrate history and beer and encouraging them to drop by their local breweries during their visit. 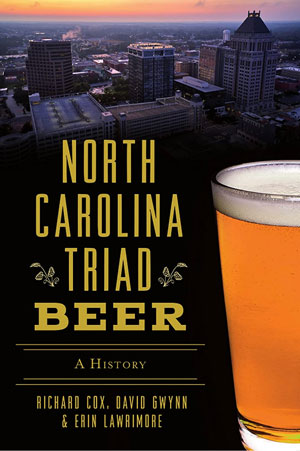 The Well Crafted NC team have published a book giving a brief (about 140 page) overview of the history of the Triad beer brewing industry, from early Moravian communities to the operators of nineteenth-century saloons and from Big Beer factories to modern craft breweries. You can view more here, and order online or at your local bookstore.

Angry Troll Brewing Company began as a collaborative venture, with multiple business partners and fundraising through the crowdfunding platform Indiegogo. The brewery opened in 2016 in the lower level of a building that once served as a Liberty Tobacco warehouse on Elkin's Main Street. The name of the brewery is a play on both its location in the building's lower level and as a reminder of the nearby Hugh Chatham Memorial Bridge, a local landmark that was demolished in 2010. View our interviews and the archive here.

SouthEnd Brewing opened at 117 W Lewis Street in Greensboro North Carolina in November of 2019. William Brown is the head brewer at SouthEnd, and discusses his time in the industry, beer tourism, and what makes SouthEnd a unique addition to the brewing industry in Greensboro. View the interview and archive here.

Hoppin' J's Farm produces 5 different varieties of hops in the Piedmont region of NC. Part of their proceeds go to their charitable foundation to rescue various animals as well as contributions to veteran organizations. View the archive here.

Richard appeared on Fox 8 News with Karmen Bulmer of Little Brother Brewing Co. to discuss Greensboro's beer scene, it's history, prohibition, and the impact of COVID-19 on the industry. You can watch to it here.